The Lourinhã region has been dedicated to wine production for a long time, which is clearly stated in the charter of rights that was granted to the region by D. Jordão with the approval of the Portuguese King, D. Afonso Henriques. Moreover, this area is also mentioned in several documents related to the History of Portuguese viticulture.On March 7, 1992, the efforts and work of so many people, together with the brandy’s high quality, were recognized by the publication of the Decree-Law no.34/92 that established the Demarcated Region of Quality Wine Spirits classified as Protected Denomination of Origin “Lourinhã”(1). This is the first and only Portuguese Demarcated Region focused exclusively on the production of brandies and one of the three existing European wine spirits regions, together with Cognac (2) and Armagnac (3).

“The production of our brandies is done in compliance with the regulation that defines the soil conditions, the cultivation characteristics and the technologies that should be used for winemaking, conservation, distillation, aging and bottling. These rules must be followed so that the product so obtained can be classified as PDO “Lourinhã”, a designation that was awarded by the Regional Wine Commission of Lisbon, an organization created by the ordinance no.739/2008”.

Over the decades, the dynamic process that led to the region’s demarcation was intensified due to the commercialization and promotion of the brandy as well as the support given to scientific research in cooperation with the National Organization of Viticulture. Over the last few years, the scientists of the National Institute for Agricultural and Veterinary Research – currently known as Pólo de Dois Portos (in Portuguese) – have been investigating this subject and writing several national and foreign publications. 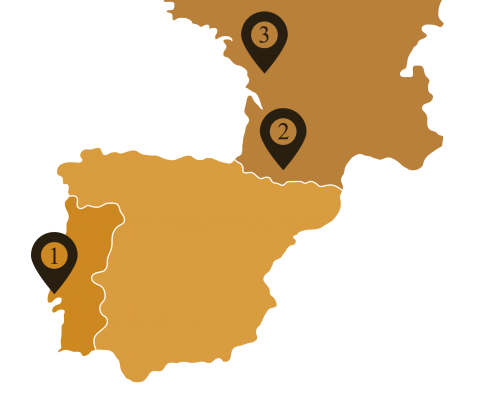 The civil parishes of the municipality of Lourinhã that are part of the Demarcated Region of Brandy Lourinhã are the following: Lourinhã and Atalaia (1), Ribamar (2), Santa Bárbara (3), Vimeiro (4), Marteleira and Miragaia (5), Moita dos Ferreiros (6), Reguengo Grande (7), Moledo and São Bartolomeu (8). The civil parishes of Peniche included are: Atouguia da Baleia (9) and Serra d’el Rei (10). In Óbidos, the civil parish is Olho Marinho (11); in Bombarral, is Vale Covo (12), and in Torres Vedras, is Campelos and Outeiro da Cabeça (13) and A-dos-Cunhados and Maceira (not yet on the map). 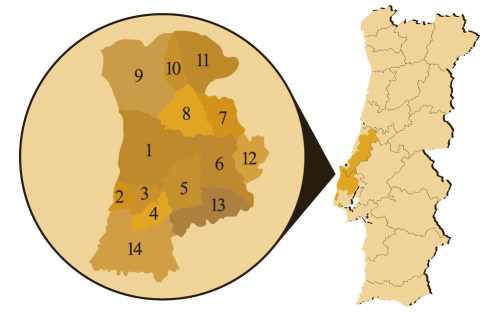 The brandies are extremely aromatic because they convey the attributes of the region’s grape varieties, the edaphoclimatic conditions and the human factor’s influence. The region’s terroir determines the aromatic and taste characteristics present in the wines that originate the Brandy DOC Lourinhã.

The region’s Mediterranean climate is strongly influenced by the proximity of the Atlantic Ocean and is generally characterized by a low thermal amplitude with cool temperatures in the summer. Summer mornings are normally foggy, and heatwaves are rare. The winter is mild, with moderate rainfall and high relative humidity.
Like most of the Portuguese mainland soil, the region’s soil is infertile and heterogeneous. Generally, the vineyards are planted on dun-colored or red Mediterranean soils. They can also be planted on dun-colored limestone soils or on fine sandstone, clay, and argillite soils.

When the Demarcated Region was established, it was decided which grape varieties would be the best to produce brandy. Among all the grape varieties authorized to be planted in the region, wine growers prefer those that are easier to manage and produce better wines. Therefore, the most important grape varieties are Malvasia Rei, Fernão Pires and Tália.

This website uses cookies to improve your experience while you navigate through the website. Out of these, the cookies that are categorized as necessary are stored on your browser as they are essential for the working of basic functionalities of the website. We also use third-party cookies that help us analyze and understand how you use this website. These cookies will be stored in your browser only with your consent. You also have the option to opt-out of these cookies. But opting out of some of these cookies may affect your browsing experience.
Necessary Always Enabled
Necessary cookies are absolutely essential for the website to function properly. These cookies ensure basic functionalities and security features of the website, anonymously.
Functional
Functional cookies help to perform certain functionalities like sharing the content of the website on social media platforms, collect feedbacks, and other third-party features.
Performance
Performance cookies are used to understand and analyze the key performance indexes of the website which helps in delivering a better user experience for the visitors.
Analytics
Analytical cookies are used to understand how visitors interact with the website. These cookies help provide information on metrics the number of visitors, bounce rate, traffic source, etc.
Advertisement
Advertisement cookies are used to provide visitors with relevant ads and marketing campaigns. These cookies track visitors across websites and collect information to provide customized ads.
Others
Other uncategorized cookies are those that are being analyzed and have not been classified into a category as yet.
SAVE & ACCEPT